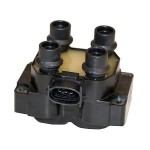 I have been working on the ignition output of the Megasquirt today, however have ran into a few snuggles. It was briefly decided many months ago that we would initially use a Ford EDIS-4 coil-pack running a wasted-spark, combined with a VR sensor pinched from a scrap Zetec engine. Upon the initial build of Megasquirt I saw a few entries related to EDIS style ignition setups and thought nothing more as I wouldn’t have to cross that bridge until we install it in the car.

That time has now arrived haha. Upon re-reading the MegaSquirt 3 assembly documents, the EDIS setups mentioned there utilise an individual unit that is separate from the main MegaSquirt, known as the EDIS module. This module combines the tach input from the VR sensor and coil driver ignitions into a single unit. From my understandings, the module sends a tach signal to the MegaSquirt in a format similar to how Coil-Negative ignition works.

For our setup we aren’t using the EDIS module, instead I want to be able to run Direct Coil Control. Which removes the necessity of the EDIS module by connecting the VR sensor and EDIS coil directly to the megasquirt itself. Three reasons why I prefer this approach;

I already know that the EDIS-4 is two separate coil packs stuck together in a single unit and I already know that my Megasquirt comes included with a single coil driver. Upon further research on the Megasquirt forums I have come to the conclusion that I need to install an additional Bosch BIP373 Ignition Driver into the ECU. A quick search on Google for the Bosch part turned up on a few distributors in the UK, all of which were currently out of stock.Logged onto to DIYAutoTune where I knew they would have the part in stock, $19 total including delivery.

In hindsight, I would of ordered the extra ignition module when I first bought the MS3 kit in summer 2011. However back then we was only going to run a ‘Fuel-only’ setup, and that was also before we decided to run a turbo. Ohh how times have changed.

I will write another post relating to installation and testing of the driver, when the parts arrive from the States.